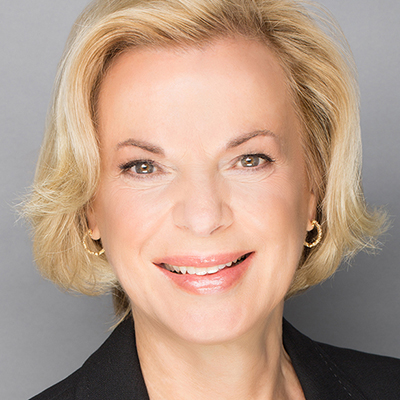 Betsy Nabel has served as president of Harvard-affiliated Brigham Health since 2010.  A cardiologist and distinguished biomedical researcher, Nabel is Professor of Medicine at Harvard Medical School. At BH, she led development of a comprehensive strategic plan that defines a new model of medicine characterized by seven strategic commitments focused on innovation in care redesign toward population health management, in research and discovery through multiple life sciences collaborations, and in personalized therapies and precision medicine. Initiatives include a new translational research and clinical facility, and a $1 billion campaign to advance innovation, patient care and community health. As director of the National Heart, Lung, and Blood Institute from 2005-2009, Nabel leveraged the $3 billion research portfolio to establish pioneering scientific programs in genomics, stem cells, and translational research. An accomplished physician-scientist, Nabel’s work on the molecular genetics of cardiovascular diseases has produced 17 patents and more than 250 scientific publications. Nabel has been named one of the nation’s top leaders in medicine by Modern Healthcare and Becker’s Hospital Review, and one of Boston’s 50 most powerful people by Boston Magazine. Her colleagues have elected her to the American Academy of the Arts and Sciences, the National Academy of Medicine, the Association of American Physicians, the American Society of Clinical Investigation, and she is a Fellow of the American Association for the Advancement of Science. Nabel is currently on the TEDMED Editorial Advisory Board, and previously served on the editorial boards for the New England Journal of Medicine and Science Translational Medicine as well as editor-in-chief of Scientific American Medicine.

Partnering for Productivity: What's Working to Populate the Pipeline?