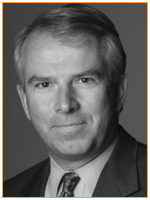 Robert J. Hugin has been CEO at Celgene since 2010 and chairman since 2011. Since 1999, he has held many leadership positions at Celgene, including president, chief operating officer, director, senior vice president, and chief financial officer. Hugin is also chairman of the Pharmaceutical Research and Manufacturers of America. Previously, he was a managing director at J.P. Morgan & Co. Inc., which he joined in 1985. Hugin serves on the board of The Medicines Company, Atlantic Health System Inc., and Family Promise and is past chairman of the HealthCare Institute of New Jersey. He received a bachelor of arts degree from Princeton University and a master of business administration degree from the University of Virginia, and served as a United States Marine Corps infantry officer.